The Celtic Twilight -- a longing to express the sublime

I think I’ve found a bit of the origins of my heart.

I've been dipping into The Celtic Twilight, by W.B. Yeats, and found a snippet I feel I can relate to completely and utterly.  Yeats is describing a situation with two different guys, both of whom are striving to encapsulate a sense of something they can't quite reach:

"...how Celtic!  How full of striving after a something never to be completely expressed in word or deed. [...]This old man always rises before me when I think of X__.  Both seek – one in wandering sentences, the other in symbolic pictures and subtle allegorical poetry – to express a something that lies beyond the range of expression; and both, if X__ will forgive me, have within them the vast and vague extravagances that lies at the bottom of the Celtic heart.  The peasant visionaries that are, the landlord duelists that were, and the whole hurly-burly of legends – Cuchulain fighting the sea for two days until the waves pass over him and he dies, Caolte storming the palace of the gods, Oisin seeking in vain for three hundred years to appease his insatiable heart with all the pleasures of faeryland, these two mystics walking up and down the mountains uttering the central dreams of their souls in no less dream-laden sentences, and this mind that finds them so interesting – are all a portion of that great Celtic phantasmagoria whose meaning no man has discovered, nor any angel revealed." 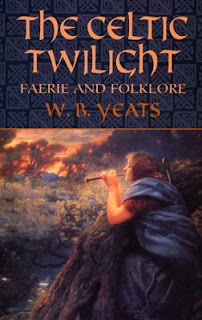