"Known by cultures all over the world, the 9 Great Rites--or Munay-Ki to the Q’ero Shaman of Peru--are energetic initiations traditionally reserved for those training as medicine workers.  They connect us to the ancient wisdom of those who have come before us and lived consciously.  We are called from within, from our own inner wisdom, to blossom and grow deeply. We awaken our indigenous selves.  The rites are given in seed form, for the receiver to grow into a beautiful garden of gifts.  As we evolve personally, we become more available to play a part in the great change of consciousness which is already under way in the world."

I received the Munay-Ki rites over a two day course in February 2010, from Skie and Red Hummingbird in Essex. My getting there on day 1 was sheer luck (or fate?) as I had incorrectly set my alarm clock and having gone to bed very late my waking up at 7.30am was a blessing!

I arrived to the “Self Centre” a house in Leigh-on-Sea, Essex, to be greeted warmly by Red Hummingbird, Skie’s partner.  I was excited, but nervous. I’d already cancelled receiving the rites a few months previously, but was to find this the perfect time to receive them.

There were 3 other girls there on day one, we were told another would be arriving the following day to receive the second set of rites (although during my time there we had an all-female group, these rites are open to both males and females).  I walked into the living room where everyone was sitting on blankets in a semi circle around Skie and Red; in front of me lay a Munay-Ki booklet, a registration form and a rattle.

First of all we opened Sacred Space, a ceremony that I found to be exciting and beautiful as energy began to surge through me; I felt as though I were taking part in something wild and extra-ordinary.  Instead of smudging the room with sage, Skie used a bottle of fiery liquid from Peru, which she held in her mouth briefly while she called in the spirit energies, and then spat a fine spray in the direction we were facing.  (Peruvian Agua de Florida.)  Skie had printed us a prayer for opening the sacred space:  we called the great serpent to the south, Mother Jaguar to the west, Hummingbird to the north, great Eagle to the south and Mother Earth and Father Sky.  We each took a bit of the drink while Skie intoned the prayer.

We were laughing and joking quite a bit during the ceremony, but there were also tears.  It is a very powerful ceremony.  What I hadn’t expected were messages from Spirit that came after we had received each rite -- these were deeply personal and touching.  We received the Harmony rites which were seven archetypes into our chakras, and had a fire ceremony to begin to grow the seeds that had been planted.  Next we received the Seer rites.  Again I felt peaceful energy.  The other women were already experiencing visions at this point.  Sadly that didn’t happen to me!  The first day ended peacefully, but that night I was energized and unable to sleep for several hours. 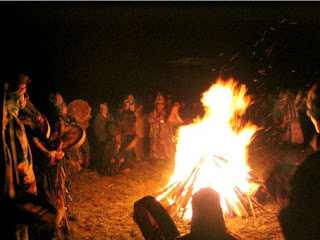 The following day, the energies became extraordinarily powerful and deep beyond anything I’ve experienced before.  The fourth girl joined us and immediately put me at ease.  I had been unable to sleep much of the night before, and so began the day pretty tired.  However, as the day’s rites began, I had a feeling of powerful nurturing, of connecting to something so beautiful I felt it was an absolute privilege to be there.  We began with the Daykeepers rite.  We sat around, again in a semicircle, crushing herbs into a large bowl, while connecting with deep feminine energy.  Then Skie brought the bowl round and we each placed our hands in it, feeling a connection with wise and powerful medicine women throughout the ages; allowing ourselves to be female.  We then dowsed ourselves with the water and herb mixture.  My messages from this rite included a message that I needed to seek healing (Skie and Red were able to give me some healing but had been instructed by Spirit that I was to seek the rest.)  I was told I’d be given help to find my path, it was noted I’d wandered off it a fair bit up until that point!  I felt beautiful energy as Skie came round.  She placed her hands on my shoulders and then placed her forehead next to mine.  I felt held and blessed. The depth of both days was just out of this world, it was like being in the womb and being stripped back to my core, without the many facades I usually functioned behind.

The Starkeepers rite was to anchor us to the energy of 2012 and the changes to come.  For this we lay down underneath blankets, while Skie passed us the rites and then drummed the energy into us.  She drummed around me and I felt a huge surge of powerful energy coursing through my whole body – the drumming felt incredible.  She had felt compelled to drum by me a fair bit and I felt taken back to a previous time.   By this time energy was still pulsing through me; I especially felt it in my crown chakra; it was almost as though I had taken drugs, the effect was almost palpable.

For the final rite we sat in chairs, spaced quite far apart in the room, while Skie came around and delivered the rite.  She blew all 9 rites into a Pi stone, a stone that dates back to the Incas, which has a hole in the centre.  I felt such incredible, deep energy, I felt held, warm, loved and blessed.  Skie whispered my message to me and  it was exactly what I'd needed to hear.  I had a deep feeling of release. The word Munay means:  "I love you" or "be as thou art" and I certainly felt loved and accepted during my two days with Skie, Red and the other brilliant women in the group.

We performed the closing ceremony to close the sacred space.  I felt a bit lost when I got home; as though I had been part of something profoundly deep and beautiful and womblike, and suddenly it was back home and back to normal again!  But I’m so grateful I did this.  I felt like my path had now truly begun.  Thank you, amazing universe! (And Skie and Red!)  I had been given several messages which themselves were beautifully healing, and this and the ceremonies gave me a sense of trust in the universe, something I had been lacking for a while.

If this taught me anything it’s that the beautiful spiritual journeys and feelings I’ve been reading about for so long do very much exist.  There is so much beauty, joy and depth to the world, and it’s a world unseen and unknown by so many.  No wonder people turn to drugs, sex and alcohol.  We yearn for something intangible, perhaps a memory lingers of a time when we had a deeper, primal, connection. Our healing nowadays often consists of healing only physical symptoms without any deeper soul work that I believe is so necessary, not only for our survival but also for the health of communities, and therefore the planet. Learning that love and openness are our natural states of being, and that we must embrace life fully, not hide from it.  We're not here to accumulate masses of material wealth and hide behind our masks which our egos think we need, such as job title.  We need to come back to a nurturing love we’ve become cynical about; not eros love which our society has become so fixated upon, but to allow a gentle loving-kindness to permeate all that we do.  Through increasing our love for all life, we might connect with something more powerful and beautiful than we could ever give voice to.

If you would like to book either a Munay-Ki course or check out other events and healing sessions from Skie Humminbird, her website is here: http://www.shamanicskie.co.uk/
Posted by The Tap Dancing Zen Cat from Outer Space ✿ at 07:57