Christianity:  “The kingdom of heaven is within you” (from the words of Jesus)

Islam:  “Those who know themselves know their Lord”

Confucianism: “Those who know their own nature, know heaven.

”Taoism:  “In the depths of the soul, one sees the Divine, the One

”Buddhism:  “Look within, you are the Buddha”

from the Shaman’s Journey:  Supernatural or Natural by Ede Frecska M.D. (printed in Inner Paths to Outer Space)

So many people can become fixated on the differences within religions, and I can understand why. Some of the main religions teach there can be only one path, and only one God, and that anyone worshipping a different path is ultimately misguided.  Oh, and that might mean that they up off to a rather hot destination when their end is nigh.  People are judged not for their good deeds, but rather, which religious box they have happened to tick.  And religious people are arguing for their very sense of purpose, for the ultimate truth, the heart of all existence everywhere.  If you have been brought up your entire life to believe only one truth, it becomes very hard to accept anything else.

The tragedy is perhaps that while people are busy arguing over who is right, and incorporating their arguments into their egos, they can forget the essence of the spiritual messages that cross all religions.  The messages are simplicity itself, with love at the heart of them all. Love, unity, laughter, compassion, gratitude, humbleness are words that immediately spring to mind. And a deeper connection can be found only by going within, by deepening our spiritual journey. The spiritual path can sometimes seem a lonely one.  Going within is a job that requires nothing outside of yourself and only you can get you there.  Yet anyone who has been on a spiritual path for a time will tell you the rewards far outweigh anything previously encountered.

Religion can be incorporated into peoples' lives for many different reasons and we are very much fallible creatures.  To believe in a God, or an afterlife, these are huge concepts.  We're going to want to protect deep beliefs such as these as much as possible, and if our beliefs are very narrow, fear-based, or very deeply ingrained, the idea of allowing a little flexibility into the equation can be damn near impossible.  And that is perhaps a real tragedy if people are unable to see anything beyond the confines of their beliefs.  Their restrictions can lead to a life perhaps lived akin to the people in Plato's Allegory of the Cave, seeing the shadows of people cast against the wall of the cave and believing that world to be the ultimate reality.

Some people want to wear their religions like a badge, quote a little from the Bible, attend Church and yet, even whilst acknowledging the beauty of their belief system, they may be unable to allow that beauty to do its transformational work on them.  In this way, they are perhaps still more concerned with status.  They are less self-aware than they need to be in order to develop.  But haven't we all been a little guilty of this?  I remember when I used to go to Buddhist meditation while simultaneously thinking myself just a little 'cool' for being there.  The ego can be slippery and elusive!  We can't eradicate it but we do need to be aware of it.  Because religious beliefs can be so powerful, it is often hard for people to disentangle their beliefs from their true identity.  We all want to be right.  And if we believe there can ultimately be only one path, everyone else potentially threatens our position.  And some religious teaching can be a little like brainwashing.  There is simply very little room for ambiguity, for allowing other religious to co-exist, peacefully, alongside.

This all might be OK, if say, there were only several thousand people on this planet.  But we currently stand at just over 7 billion people.  And there are some pretty urgent issues that need our full attention.

So how to go forward?  We need to pare things down to basics.  To being Humanists first and foremost, being kind to fellow humans and animals and our planet which lovingly sustains us.  And being kind for its own sake, not for an imagined reward in a life hereafter, not for fear that a God might strike us down.  We need to develop an attitude of compassion and kindness.  Blind faith needs striking off the list.   We should be able to test our faith by allowing ourselves to have our own religious experiences, whether through meditation, prayer, fasting, walking in nature or just being kind to someone.  We need to allow everyone else their own beliefs, providing those beliefs do not harm any other lifeforms.  Co-existence simply has to be the way forward.  Life on this planet is starting to feel a bit crowded, and we need to collectively turn our attention towards more urgent questions, such as the problem of mankind's impact on this world.  We can't do that so effectively if we are too busy fighting to protect our beliefs.  We are currently having a pretty devastating impact on this planet -- it's huge.  From the threats to coral reefs, the amount of rubbish we produce, to GM crops or the amount of trees we needlessly chop down.  We often don't want to acknowledge the mess we're creating, and we can find all sorts of ways to distract ourselves, from fighting about pointless things, to going on a consumerist binge through vast, soulless, shopping malls.  Our ability to walk through life, blinkered to all the terrible things that are currently going on, shouldn't be underestimated.  But we all need to participate more in the care of this world.  Turning a blind eye simply isn't going to work as a long-term strategy.  We're threatening our own survival as a species through our current actions.

Initially, for all those who are spiritual or religious, we need to allow ourselves space to worship, to feel reverence, but to back off and allow others to feel perfectly entitled to the same whether for 'our' religion, or a differing one without feeling the need to become self-righteous (or to relegate their belief system as being 'less').  Respect for other religions is key.

We need to be able to let go and allow gentle scrutiny to replace blind faith; and allow ourselves to be able to laugh at our indignant and childlike, egos.  The more self-awareness we bring into the whole affair, the more we develop understanding and compassion for ourselves and others.  I imagine the most judgemental people are the ones who practise the least self-awareness and humility.

Ultimately, perhaps, we also need to lighten up.  We can take ourselves so very seriously. How would we act if we truly knew the heart of all life was love and joy, that we are truly all One consciousness experiencing itself subjectively (as Bill Hicks used to say!), and that God is perhaps being revealed at all times through endless acts of creation.  And,that at any minute if we stop and listen for just a second, we might hear the song of God, softly woven into the fabric of the universe -- just waiting for us to notice. 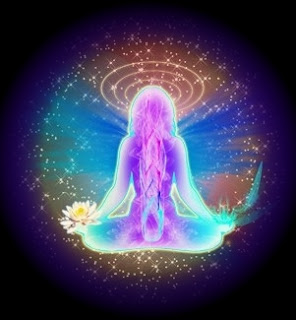 Posted by The Tap Dancing Zen Cat from Outer Space ✿ at 17:56